IndiaSkills Competition is organised by National Skill Development Corporation (NSDC), an apex skill development organisation working under the aegis of the Ministry of Skill Development and Entrepreneurship (MSDE). NSDC has been leading India’s participation at the WorldSkills International competitions since 2011. In the last edition of WorldSkills International 2019 held in Kazan, Russia, India won one gold and silver medals each, two bronze medals and 15 Medallions of Excellence, ranking 13 among 63 countries that participated in the global event for skill appreciation.

The country’s biggest skill competition is designed to demonstrate the highest standards of skilling and offers a platform to young people to showcase their talent at national and international levels. IndiaSkills Competition is held every two years with the support of state governments and industry. With 30 states and Union Territories (UTs) participating in 54 skills, including seven new-age ones, in 2021, IndiaSkills Competition has the potential to reach grassroot level and make an impact.

IndiaSkills Competition will be held in December 2021. The competitors will showcase their skills in areas such as beauty therapy, cyber security, floristry robot system integration, cloud computing, water technology, painting and decorating, health and social care, among others.

The winners of IndiaSkills 2021 will undergo training and get an opportunity to represent the country at the coveted WorldSkills Competition to be held in Shanghai, China in 2022. The candidates will compete against more than 1,400 participants from over 60 countries. A biennial competition, WorldSkills Competition has become popular over the years and has earned the moniker of ‘Olympics of Skills’. 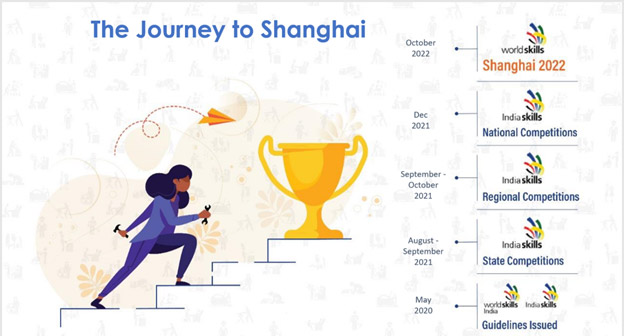 Roadmap to a better future